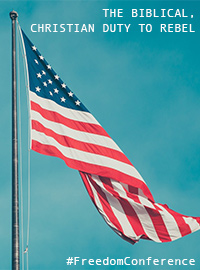 Session 1 at the 2016 Freedom Conference in Tucumcari, New Mexico. Immanuel Baptist Church hosted Bojidar Marinov as featured speaker. In this opening session, we begin to talk about the prevalent, but greatly mistaken, interpretation of Romans 13:1-7 that would have Christians yield unqualified obedience to even the worst of civil states. Marinov shows that, in its historical context (specifically, the pagan concept of “oneness of being,” which animated the Roman empire,) Paul’s words in that passage are actually revolutionary, and not merely in the sense of “innovative.” They are revolutionary in the sense of “seditious,” and they spelled the eventual end of that beastly empire.

Check Out The Other Sessions:

The Evil of the Executive State

The Way Of Wise Rebellion

Q & A with Bojidar Marinov